Gone are the days when making vadam was a family event. From buying ready made packets in stores and then directly into tiffin boxes, kids these days don’t know the emotions and sentiments attached to their every day foods. 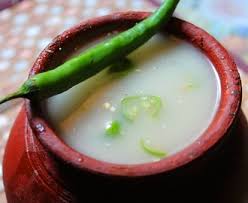 Given below is a step by step ’emotional guide’ to the vadam making process.

Step 1: Paati would make the maavu, called vadam koozhu. Just like how we all attack the cake batter before it goes into the oven, the kids (currently, our parents) had to literally be driven out of the kitchen for the same!

Step 2: Paati would spread out the vadam koozhu in different patterns on thatha’s dhoti (which he desperately searches for, in the upcoming week!) and leave it out in the sun to dry.

Step 3: The kids then become the legal guardians of the “out to dry” vadam. They sit out in the sun all day, pretending to study and drive away the birds that come to eat their precious accompaniment to any food!

Step 4: BLAME THE CROWS for the missing pieces of vadam. Always blame the crows.

The crisp sound catches your attention very easily, but it’s the making that enticed kids from the 90s. Many a times, kids are found in the terraces and rooftops trying to shoo crows away. Sometimes it’s a squirrel or a small animal trying to get a nibble of some nicely ground and spiced up batter left to be dried. But, no. The kids would never let the animals win.

“I remember how my mother used to keep the vadam under lock and key. But most of the fun was in eating the semi dried maavu… That was totally in our control,” says Latha, a teacher. Change is the only constant and nothing is immune to it. Not even one of the tastiest traditional snacks of Tamil Nadu. “Nowadays, there’s just no time. Chillies have replaced the children as guardians, Thatha’s dhoti has become plastic sheets [good for thatha, but traditions?] and the packet vadam is still raw,” exclaims Shyamala Gopal, an IT professional.

Such a joyous occasion has been lost to the tides of time. Making Vadam koozhu is a ritual engaging the grandparents and the grandkids when the generation in between is out to work. Such bliss is incomparable. Unfortunately, it is now unrecognizable.

Get back the nostalgic feeling, order your homemade Vadam koozhu and much more, only at www.moremilaga.com